Frank is supposed to say “serenity now” every time his blood pressure is in danger of going up. Jerry’s girlfriend gives his Knicks tickets away. She comments that she has never seen him get “real mad.” George gets Kramer to help him fix his parents’ screen door. They remove the old door and Kramer takes it with him. Frank is selling computers; he wants to bring George into his business. Lippman’s boy tries taking advantage of becoming a man at his bar mitzvah by using his tongue while kissing Elaine. Kramer installs the screen door outside his apartment to give his apartment “the cool even breezes of Anytown, USA.” His initial instinct is to quit, but George decides it is finally time to take on his arch-nemesis, Lloyd Braun, whom Frank has also hired to sell computers. When Jerry learns how to get mad, it releases all his other feelings, including caring and another that results in a proposal. Kramer fights with the neighborhood kids of “Anytown, USA.” George tells Elaine she is attractive to the Lippman men because of her “shiksappeal.” The result gets her two Lippman “men” who want to denounce their religion. George hatches a scheme to sell more computers; however, continual use of the phrase “serenity now” has an “impact” on computer sales. The release of emotions from George has an impact on emotional Jerry. Elaine seeks help from a “rabbi” to see if she can reduce her “shiksappeal.” 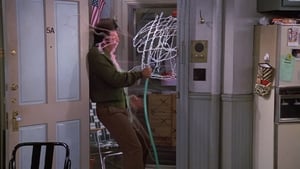 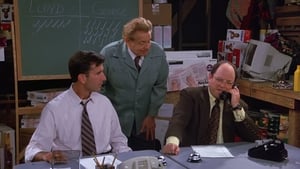 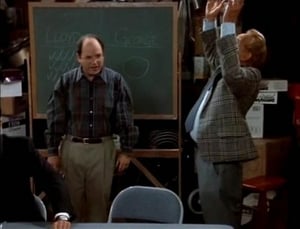