A woman mistakes George for her boyfriend Neil, a guy who looks just like him. This intrigues George; he wants to meet Neil. Jerry is going to Florida to help his parents move. Kramer asks him to pick up some Cubans from his cigar guy and also gives him a T-shirt. Elaine and her boyfriend see “The English Patient”; she absolutely hates it and that makes her unpopular and dumped. Jerry’s dad gets the T-shirt, #1 Dad, that he is very proud to wear, despite its small size. At his parents’ exercise room, Jerry meets Izzy, an 80-year-old man who can’t stand to lose; he challenges Jerry to a weightlifting competition; “It’s go time!” He throws his back out again and again. Kramer’s Cubans arrive; they’re real people and not the cigars that Jerry thought he would be getting. George is overly obsessed with Neil, to the point where he is missing out on Danielle. Jerry is back in New York, where Izzy has returned to see a back specialist. Though Kramer’s Cubans are really Dominicans he tries to pass them off as “Cubans” anyway; it doesn’t work. Elaine’s dislike for the film alienates her from everyone. When she tells Peterman that she hasn’t seen the film, he immediately takes steps to correct the situation. Jerry meets the rest of Izzy’s family all of who are fiercely competitive. He finds work for Kramer’s “Cubans.” Elaine still hates the movie, but must go to the Tunisian desert to live in a cave to save her job. Kramer thinks his unemployed Dominicans, whom he educated about communism, are planning to revolt; later they do. George gets a last word on Neil when Danielle makes a decision between the two of them. 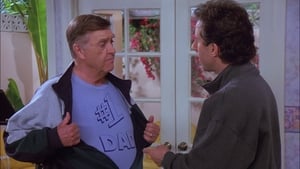 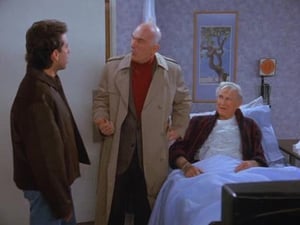