Jerry uses Elaine to prove that a sales clerk is wrong about his looking at an expensive jacket. Elaine is picked up by the clerk. George has an unwanted house guest, a wig master for the touring company of “Joseph and the Amazing Technicolor Dreamcoat.” He also has found a parking lot that charges $75 dollars a month; Kramer decides to put his car there. Unfortunately, he leaves his apartment key there. When he can’t get his key, he is allowed to borrow a pink Cadillac. Jerry is convinced the clerk is working Elaine. George discovers why the lot is so cheap, he finds a used condom in his car and is asking a prostitute for information, just as Susan approaches. George discovers that he may have an out with Susan; she says she must be able to trust him and have no doubts. Kramer stays at Jerry’s apartment. Elaine has a walking stick she lets Kramer have. Jerry tries to return his jacket, but discovers that “spite” isn’t a viable reason. Kramer is allowed to borrow the back up “Electric Color Dreamcoat.” Jerry is put out, when both sexes assume he isn’t in a relationship with the person he is with (Elaine in one instance, the Wig Master in the other). Kramer finds a fuzzy white hat. With all the parts put together, his new ensemble is a sight to behold, just ask the NYPD after he is caught pulling a prostitute out of his borrowed car. 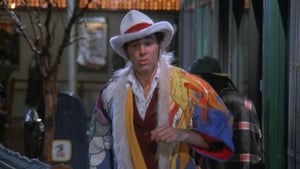 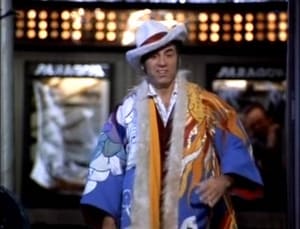