Kramer is active in the re-opening of an old movie theater. He also is keeping an eye on a friend, Lloyd, who’s recovering from a nervous breakdown. Lloyd has a pack of Chinese gum that Kramer insists everyone tries. George thinks the cashier short-changed him and meets a former neighbor (who’s had a breakdown) and his daughter, Deena. George lets his former neighbor look at his car. Elaine tries to avoid interacting with Lloyd, loses a button from her blouse and reveals herself to Lloyd and Kramer. Because of Elaine’s lie, Jerry must wear glasses while around Lloyd. Deena tells George that she thinks he is showing signs of being on the verge of a breakdown. George’s car, once owned by “Jon Voight”, catches fire. Elaine shows more to Lloyd. Jerry gets more gum. George keeps trying to convince Deena he’s not crazy. 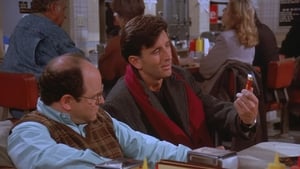 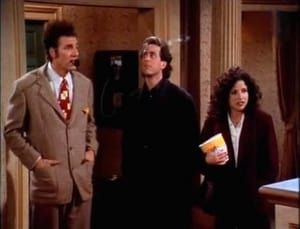