Jerry helps George out with a coffee table stain and makes Elaine take the subway home and gives her Mr. Costanza’s TV Guide to read. While on the train, Elaine meets a strange man obsessed with television. George meets a woman at a refinishing store who he brings back to his parent’s home and passes it off as his. A female Native American that he is interested in thinks Jerry is racially insensitive when he presents Elaine with a cigar-store Indian as a peace offering. George gets grounded when his parents return from vacation and find a prophylactic wrapper in their bed and a missing TV Guide. Kramer has an idea for a coffee table book on coffee tables that Elaine doesn’t like but Mr. Lippman does. 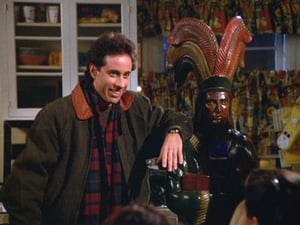